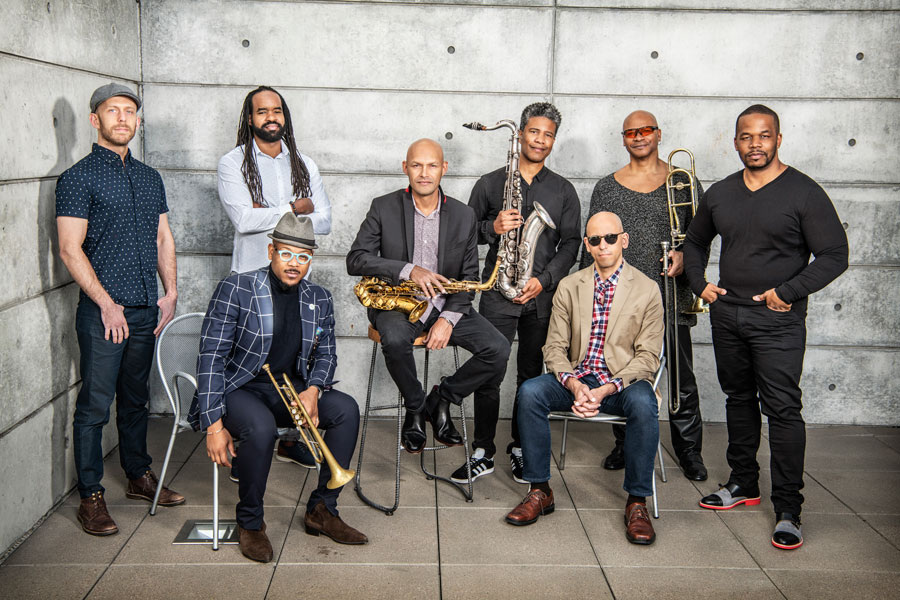 The SFJAZZ Collective is an all-star award-winning jazz ensemble comprising eight of the finest performers/composers at work in jazz today. Launched in 2004 by SFJAZZ in San Francisco, the SFJAZZ Collective has become one of the most exciting and acclaimed groups on the jazz scene. The award-winning SFJAZZ Center in San Francisco is the Collective’s home base.    The current octet is a burnished international ensemble comprising alto saxophonist Miguel Zenón, tenor saxophonist David Sánchez, vibraphonist Warren Wolf, trumpeter Sean Jones, trombonist Robin Eubanks, pianist Edward Simon, bassist Matt Penman and drummer Obed Calvaire.

In addition to its outstanding line-up with a leaderless format, the SFJAZZ Collective has also been praised for the innovative approach to repertoire. Through the pioneering approach of simultaneously honoring jazz’s recent history while championing the music’s up-to-the-minute directions, the Collective embodies SFJAZZ’s commitment to jazz as a living, ever-relevant art form.
As soloists, composers, and bandleaders, the SFJAZZ Collective represents what’s happening now in jazz. They also demonstrate that jazz has truly become an international language. Hailing from Ohio, Baltimore, Miami, Puerto Rico, Venezuela, and New Zealand, the Collective’s multi-cultural lineup mirrors the explosion of jazz talent around the globe. However, the jazz community only reached its current state by maintaining its traditions while simultaneously embracing innovation. This, too, is the essence of the SFJAZZ Collective. These exceptional artists come together in the name of jazz as a constantly evolving, quintessentially modern music.
The idea for the Collective arose from discussions between SFJAZZ’s founder and executive artistic director Randall Kline and saxophonist and founding Collective member Joshua Redman. While deeply respectful of jazz’s origins and early traditions, SFJAZZ was concerned that the modern side of jazz, from roughly the mid- 20th-century to the present day, was often overlooked in the public eye in comparison with the music of jazz’s so-called “Golden Age.” Both Kline and Redman were eager to showcase, in a manner that would resonate with jazz aficionados and newcomers alike, the artistic continuum from modern masters to today’s new generation of players. Much like chamber music, the music is designed for a small group of instruments to be performed in intimate settings and atmospheres including performing arts centers, concert halls and salons.