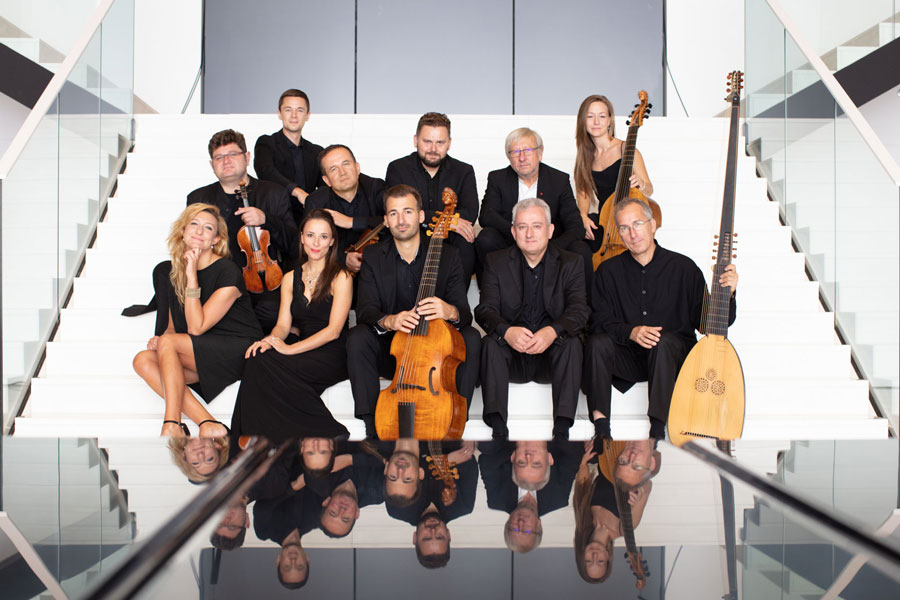 The image of Our Lady of Sorrows that we know from the Gospel, mourning the death of her son, has inspired and continues to inspire many composers to this day. The musical history of Stabat Mater dates to the 13th century, when a chorale sequence was created, the authorship of which was attributed to the Franciscan Jacopone da Todi for many years. In subsequent eras, this was a theme of interest to many composers, such as Antonio Vivaldi, Giovanni Battista Pergolesi, Karol Szymanowski or Arvo Pärt. Antonio Maria Bononcini and Emanuele d'Astorga also belong to this group.

Living at the turn of the 17th and 18th centuries, Antonio Maria Bononcini enjoyed the recognition of his contemporary audience. He owed fame not only to music, but also his undoubted talent, which he developed with his older brother, Giovanni Battista. The elder Bononcini, also a composer of great talent, was already famous in Italy as a twenty-year-old and had already begun his international career: he was employed at the Vienna court of Emperor Leopold I. Soon, Antonio Maria followed that path: after some time, he went to Vienna and took the position of kapellmeister of the Emperor’s brother, Charles. It was there that he most likely created most of his most famous works, including the heartrending Stabat Mater, dated 1710. This extraordinary composition certainly confirms the words with which Padre Martini (father of musical historiography) defined Antonio Maria Bononcini "Noble, ingenious and endearing".

Stabat Mater by Emanuele d'Astorga is the most famous work by this composer. A native of Sicily and younger than Antonio Maria Bononcini, the composer was educated for only three years with Francesco Scarlatti (Alessandro Scarlatti’s younger brother). Because of his aristocratic origin, Baron d'Astorga created music mainly to his heart content, he never had to compose to earn a living. Like the members of the Bononcini family, he was appreciated not only by the Italian audience. He also presented his works abroad, in Austria and England. Stabat Mater by d'Astorga, which is a musical account of the suffering of the Mother of God after the death of Christ, was composed most probably in London, commissioned by one of the British music societies. This charismatic work is shrouded in legend thanks to the Romantic opera Astorga written in 1866 by Johann Joseph Abert. The libretto of the opera, whose main protagonist is an artist who lives a stormy life: army officer quenching rebellions in Sicily and at the same time ungrateful husband and father, was inspired by the life of d'Astorga. An important thread in the story is the transformation of the main character happening just after hearing Stabat Mater.