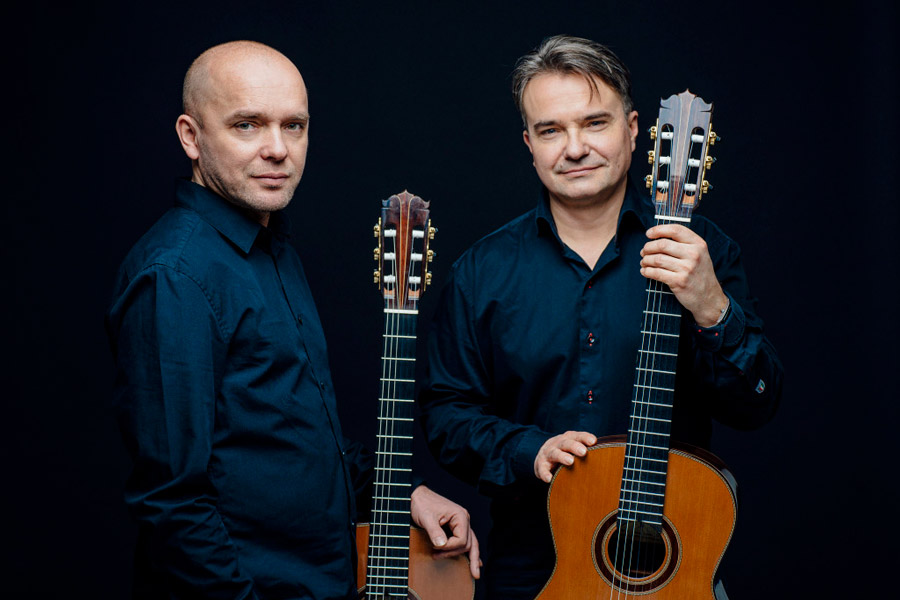 Pełech & Horn Duo prove that you do not need the entire orchestra to tightly fill a concert hall with stunning sound. The two men perform the compositions of the greatest guitar masters in a great style. With incredible precision, subtle and sophisticated playing and an original approach to musical material, they set new standards in their field.

The artists making up the Pełech & Horn Duo are among the top guitarists in our country. Krzysztof Pełech is a three-time winner of the title of the best Polish classical guitarist. He is known to the Wrocław audience as the artistic director of the GITARA + Wrocław Guitar Festival and the Summer Guitar Workshop in Krzyżowa. He regularly performs both at home and abroad. He has already made sixteen albums. The other member of Pełech & Horna Duo - Robert Horna - is a recognized guitarist - soloist and chamber musician. Like Krzysztof Pełech, he is a graduate of the Wrocław Academy of Music. He also studied at the Dutch Enschede and learned jazz from Artur Lesicki. So far, he has released three solo albums containing works of early, contemporary and classical music.

For several years, the pair have been enchanting the audience with their own arrangements in the climate of Latin American, Spanish, film, jazz and classical music. During the concert, they will present a wide cross-section of their repertoire. They will take listeners on a journey to the world of spontaneous salsa, romantic bossa nova, thrilling tango or subtle jazz improvisations. Guitar lovers can count on well-known songs by Pat Metheny, Ralph Towner and Freddie Mercury, as well as the duo’s interpretations of the music of such artists as Aziz Mustafa Zadeh and Celso Machado.