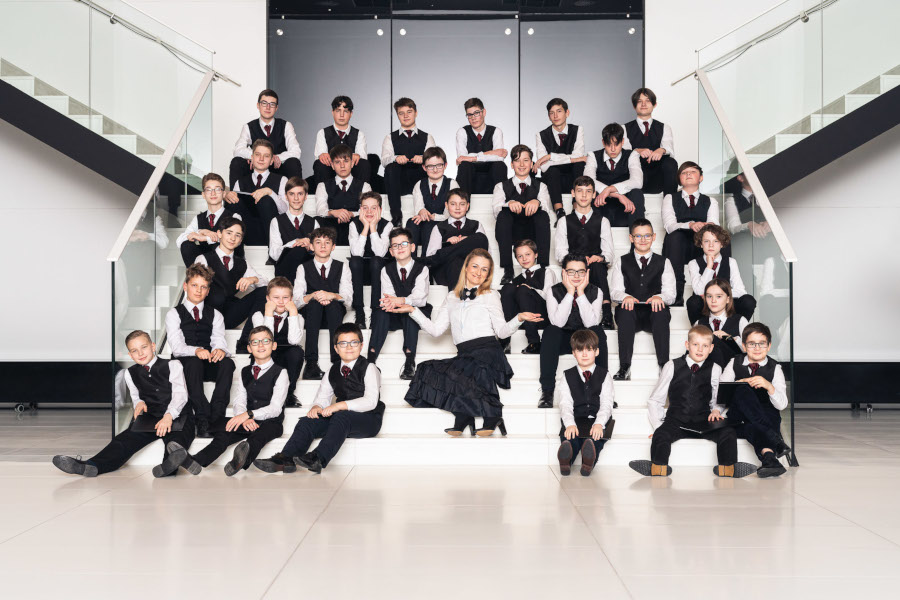 We invite you to a concert of the NFM Boys’ Choir, who this time will perform together with their friends from Die Wuppertaler Kurrende from Germany. Both choirs will be conducted by their conductors: Małgorzata Podzielny and Markus Teutschbein. The concert initiates a project of interchoral exchange, which will be an opportunity to present more often international boys’ choirs at the NFM.

The tradition of boys’ choirs in European culture dates back to the mid-eighth century. It resulted from the ban on women to participate in the musical setting of the mass at that time. Accordingly, the soprano and alto parts began to be performed by young boys before the mutation. Boys-only choirs are referred to as Knabenchor (from the German Knabe = boy) or Kurrende (from the Latin word currere = to run), which is associated with the Protestant custom of carolling by poor boys going from house to house and on city streets during the Christmas season as well as during wedding and funeral ceremonies. The need to use boys’ voices in choirs during church liturgies made it possible for over a thousand years for poor boys with beautiful voices to obtain musical education and attend church schools free of charge. This custom is still practiced, as exemplified by the famous German countertenor Andreas Scholl, who began his adventure with music as a seven-year-old by singing in Die Kiedricher Chorbuben – a boys’ choir dating back to 1333 at the basilica in his hometown. Classical boys’ choirs are most numerous in Great Britain and the United States, but the tradition of setting them up is also strong in France, Germany, Canada, the Netherlands, Spain, Austria, and Sweden. The oldest boys’ choir, active without hiatus since 975, is the Bavarian ensemble Die Regensburger Domspatzen, and in Poland the Boys’ and Men’s Choir of the Poznań Philharmonic, known as the Poznań Nightingales, officially founded in 1945 by Stefan Stuligrosz, although already active in the war conspiracy since the autumn of 1939. Die Wuppertaler Kurrende was founded by Erich vom Baur in 1924 and is the oldest boys’ choir in the Evangelical Church in North Rhine-Westphalia.

During the concert, both choirs will present the sound of boys’ voices in a sacred repertoire. The NFM Boys’ Choir will perform, among others two psalms from the collection Melodies for Polish Psalter by Mikołaj Gomółka in a beautiful Old Polish translation by Jan Kochanowski and the three-part motet Jesu, rex admirabilis of the master of Renaissance polyphony, Giovanni Pierluigi da Palestrina, to the text of the hymn of Bernard of Clairvaux. The Wuppertal carol singers, alongside a Protestant repertoire – such as Johann Sebastian Bach’s motet Unser Leben ist ein Schatten – will also perform contemporary religious compositions, including Pie Jesu by the American composer Victor C. Johnson and the arrangement of the prayer Our Father in German, dedicated by Arvo Pärt to Pope Benedict XVI on the 60th anniversary of his priestly ordination. At the end, both choirs will perform two works together: the hymn Misericordias Domini by the Polish composer Henryk Bator and the motet Ave verum corpus by Wolfgang Amadeus Mozart in honour of Corpus Christi.