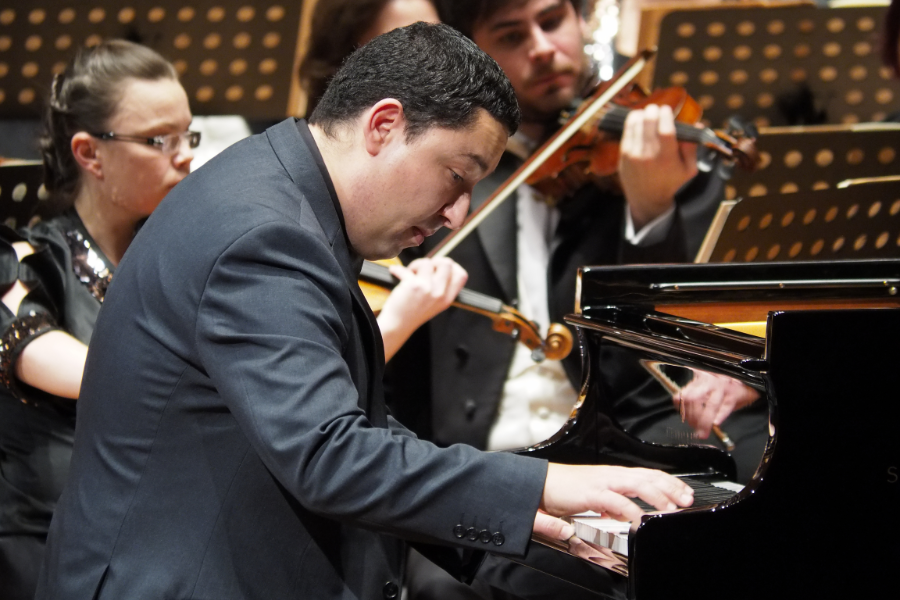 We invite you to the concert of the Pannon Philharmonic Orchestra. This excellent ensemble, based in the city of Pécs in the south of Hungary, will perform three works for the Wrocław audience. Two of them belong to the canon of well-known and often performed pieces, and the third was written by a less popular composer born in Kolozsvár.

The concert will begin with the monumental, four-movement Piano Concerto No. 2 in B flat major op. 83 by Johannes Brahms. It is by no means a work in which the author impresses with the virtuosity of the piano part, but melancholic, reflective music, full of warmth and reflection. Darkened, dimmed colous prevail here. The concerto opens with a soft French horn solo, followed by a piano after a few bars. The second movement is the most violent and turbulent, but even here the middle section is slow and muted. The Andante, that is the third movement, opens with an extensive, singing solo of the cello, which here dialogues with the piano. In the light and graceful finale, Brahms used Hungarian themes that gave the music a swashbuckling character.
After the break, we will listen to a piece by Sándor Veress, a Hungarian composer belonging to the same generation as Witold Lutosławski or Dimitri Shostakovich. He spent the first half of his long life in Hungary and the second in Switzerland. He left a very large body of work, including one opera, two ballets, as well as numerous orchestral, chamber, piano and choral works. The Wrocław concert will feature the moving Threnos (in memoriam Béla Bartók), written in 1945 and dedicated to the memory of the composer’s famous teacher.

The concert ends with the performance of the tone poem by Richard Strauss, Till Eulenspiegel’s Merry Pranks op. 28, a humoresque, the protagonist of which is a character from the German folk tradition, a prankster, rogue and troublemaker who disregards social norms and customs. Strauss vividly depicts the adventures of the protagonist, represented by two motifs performed by a French horn and a clarinet. We can hear the neigh of the horse he has stolen. Till enters the market and breaks pots, then mocks the monks singing a religious hymn, falls in love unhappily, and then, dressed in a toga, he gives a sermon, which at the climax turns into a comic polka. Eventually, however, Till is captured and put on trial, and then sentenced to death for blasphemy. Till tries desperately to defend himself, but his line of defense does not make any impression on law enforcement officials. The rogue lands at the gallows, which is illustrated by the desperate high squeals of the clarinet. When it seems that the music will melt into silence, Till’s theme returns in a hurricane manner, ending the work with sharp, powerful chords. The one who laughs last!