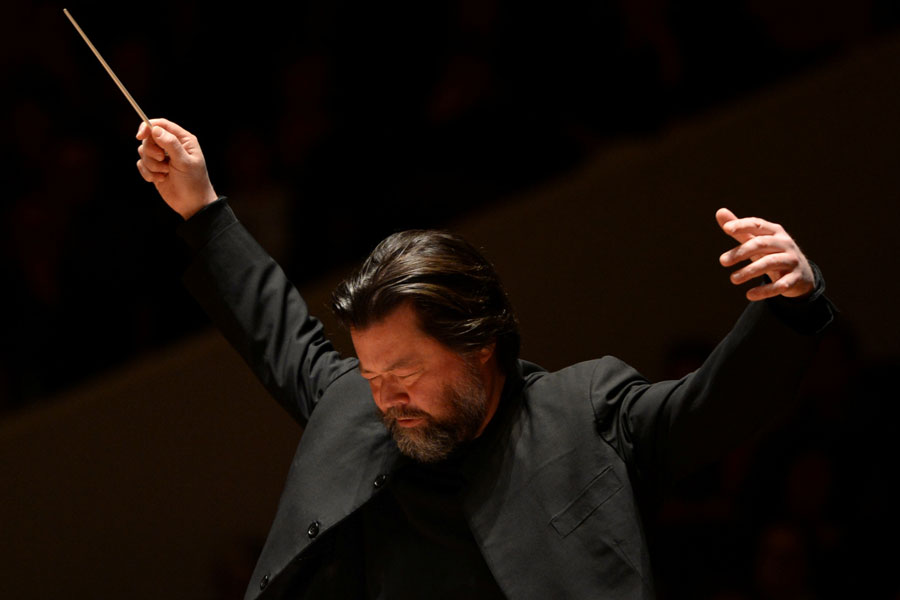 An American of Norwegian and Japanese descent, Joseph Swensen was born in Hoboken, New Jersey and grew up in Harlem, New York City. He currently holds the post of Conductor Emeritus of the Scottish Chamber Orchestra, where he was Principal Conductor from 1996-2005. He is Principal Guest Conductor of the Orquesta Ciudad de Granada, in Spain, and Artistic Partner of the Northwest Sinfonietta, in the United States. He has served as Principal Guest Conductor and Artistic Adviser of the Orchestre de Chambre de Paris from 2009-2012 and has held positions at the Malmö Opera (2008-2011), Lahti Symphony, and the BBC National Orchestra of Wales. Swensen is the Starling Professor of Music, violin, at Indiana University, Jacobs School of Music. He has also been awarded an honorary doctorate from St Andrew’s University, Scotland, and was invited to give a TEDx Talk with the title 'Habitats for Music and the Sound of Math', about music education and the developing brain, at the New York Institute of Technology. Joseph and Victoria Swensen are the founders of Habitat4Music, a non-profit organisation devoted to establishing participatory music education programmes for children in underserved areas worldwide.

Agnieszka Franków-Żelazny was born on March 24, 1976, in Głubczyce. She graduated from the University of Wrocław in 2000 with a degree in biology. That year, she founded the Kameralny Chór Akademii Medycznej (Medici Cantantes Choir at the Medical University of Wrocław).  In 2004, she received a diploma from the Karol Lipiński Academy of Music in Wrocław, where she studied Music Education and was awarded a diploma in 2005 from the Vocal Department. During this time, she was honoured with the first prize in the National Contest for Choir Conductors. In 2006, she completed the Postgraduate Voice Production and Training Programme at the Academy of Music in Bydgoszcz. Since June 2006, Franków-Żelazny has been the artistic director of the National Forum of Music Choir. In 2008, she was awarded a special prize for conductors from the 39th Legnica Cantat National Choir Contest. Franków-Żelazny became the head of Polish National Youth Choir, which she also founded, in 2013. She completed course work at the Academy of Culture Leaders at the Economic University of Kraków, in 2014 and was distinguished with the Gloria Artis Bronze Medal for Merit to Culture. The following January, she was named the programme director of the Choral Academy of the National Forum of Music. In 2016, Franków-Żelazny was a music curator for the year that Wrocław served as the European Capital of Culture. The album DE PROFUNDIS – Polish Psalms of the 20th and 21st Century with the NMF Choir under her direction was awarded the Fryderyk prize for the best choral, oratorio and orchestra music, 2017. She currently works as an Associate Professor at the Academy of Music in Wrocław.

Estonian-born composer, Arvo Pärt wrote Te Deum for three choirs, prepared piano, string orchestra and tape, in 1984. The piece was premiered on January 19, 1985, by the Kölner RSO and Kölner Rundfunkchor under the direction of Dennis Russell Davies in Köln, Germany. Te Deum is a setting of the Latin Te Deum text, also known as the Ambrosian Hymn attributed to Saints Ambrose, Augustine, and Hilary. The work is composed using a tonal technique called ‘tintinnabuli’ created by the composer in 1976. The basis of ‘tintinnabuli’ style is a two-part harmonic texture created by a melodic voice and a ‘tintinnabuli’ voice sounding the tonic triad. It is a minimalistic compositional style, which gets its name from the bell-like resemblance of notes in a triad. The composer said of the piece, 'The liturgical text of the Te Deum consists of immutable truths. I am reminded of the sense of immeasurable serenity imparted by a mountain panorama. Swiss artist Martin Ruf once told me that he can distinguish over twenty shades of blue in the mountains when the air is clear. His words immediately turned into sound; I began to 'hear' those 'blue' mountains. I wished only to convey a mood, a mood that could be infinite in time, by delicately removing one piece – one particle of time – out of the flow of infinity. I had to draw this music gently out of silence and emptiness. The work Te Deum was a quest for something evanescent, something long lost or not yet found, the quest for something believed to be non-existent, but so real that it exists not only within us but beyond our being as well.'

Dmitri Shostakovich completed his Fourteenth Symphony, in the spring of 1969. Its first performance took place on September 29, 1969, in Leningrad, played by the Moscow Chamber Orchestra with soprano, Galina Vishnyevskaya, and bass, Mark Reshetin, conducted by Rudolf Barshai. The Fourteenth Symphony is an extended song-cycle for two singers, scored for a chamber orchestra of strings and percussion. Each of the eleven movements is a single poem. The texts are Russian translations of the Spanish poet Lorca, the French poet Apollinaire, and the German poet Rilke, with a few climactic lines by the Russian romantic Wilhelm Küchelbecker. The following is written in the preface to the score, 'I want listeners to reflect upon my new symphony… to realise that they must lead pure and fruitful lives for the glory of their Motherland, their people and the most progressive ideas motivating our socialist society. That is what I was thinking about as I wrote my new work. I want my listeners, as they leave the hall after hearing my symphony, to think that life is truly beautiful.' From Lorca’s horrifying visions of the Spanish Civil War, Apollinaire’s strange meditations on personal guilt and complicity, Küchelbecker’s assertion of the moral duty of the artist and, Rilke’s powerful expression of what happens when an artist dies, Shostakovich arranged the texts as a commentary on the subject of death. The composer wrote to his friend, Isaak Glikman, 'In part, I am trying to polemicise with the great classics who touched upon the theme of death in their work… Remember the death of Boris Godunov. When… he dies, then a kind of brightening sets in. Remember Verdi's Otello. When the whole tragedy ends, and Desdemona and Otello die, we also experience a beautiful tranquillity. Remember Aida. When the tragic demise of the hero and heroine occurs, it is softened with radiant music.' He continued, 'Everything that I have written until now over these long years has been a preparation for this work.'