The Oak Crown – for the Mary Rose

K. Turner Berceuse for the Mary Rose Op. 50
N. Burzyńska The Oak Crown (world premiere of a work commissioned by the NFM)
A. Dvořák String Quartet in F major No. 12 Op. 96 'American' (arr. for wind quintet by D. Walter) 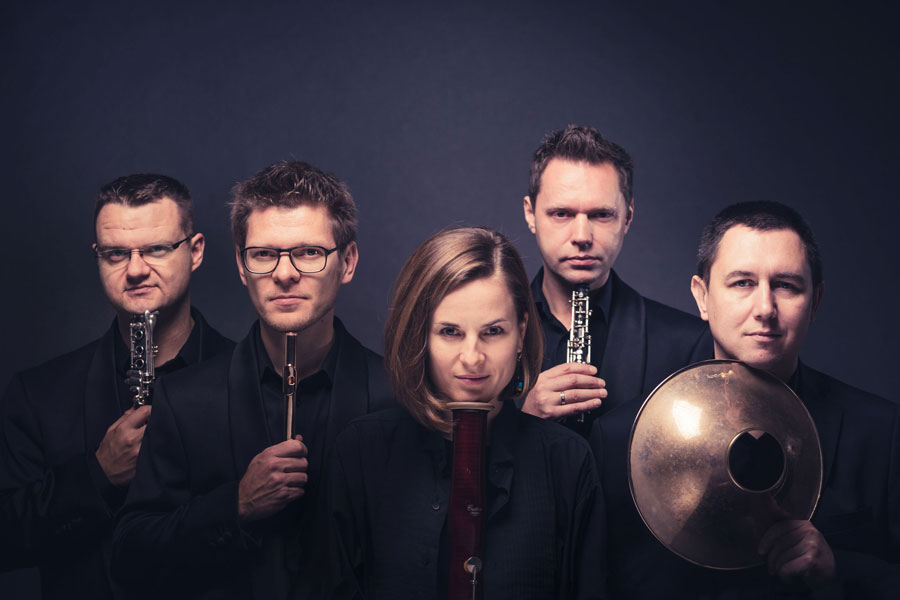 The LutosAir Quintet is extremely excited to present the world premiere performance of Nikolet Burzyńska’s The Oak Crown comissioned by The Narodowe Forum Muzyki.

Ms Burzyńska received the 27 pieces: Hilary Hahn Encores prize, as well as prizes from the Tactus Young Composers Forum, the Sorodha Composition Competition, the Competition for the 90th anniversary of the III Silesian Revolt for her piece Silesian Pyromagma for choir and orchestra, and the 1st International Composition Competition, Patri Patriae, for her work Flamma for female choir and orchestra.

During her studies at Fryderyk Chopin University of Music, and Strasbourg Conservatory as well as in her auxiliary course-work Burzyńska worked with composers including Mark Andre, Louis Andriessen, Jeroen D’hoe, Jung Hee Choi, Marcin Błażewicz, Stanisław Moryto, Tadeusz Wielecki, Martijn Padding, Richard Ayres. Additionally, she has been granted the Prime Minister Scholarship, and the Marshal of the Silesian Voivodeship Scholarship.

The Oak Crown has many meanings. Oaks are one of the most powerful, long-living trees in Poland and are particularly revered by the Slavic, Germanic, Celtic, Greek and Roman cultures. The oak emanates power and nobility and for this reason, the Romans venerated their honourable citizens with a crown of oak leaves. The wreath is also associated with the patron of the year 2017, Tadeusz Kosciuszko, who was honoured at the reception of Prince Czartoryski. Kosciuszko blatantly stressed the need for respect and dignity for all people regardless of social status. Thus he is held in high regard not only in his native country but also in the United States, where he demonstrated his nobility of character by donating a large sum of money in order to buy freedom for the enslaved during the American Civil War.

These ideas about oak trees and oak wreaths, along with their associations, have had a unique influence on the harmonic language of Burzyńska’s new piece. The Oak Crown presents is a mixture of nobility and power while also depicting the tranquil and dreamlike setting of the deep forest. Old oaks often have twisted branches and leaves that intertwine in extremely dense patterns. The shorter sections of the work reflect on this bending, twisting, braiding, and curling among the boughs, while other portions are inspired by the life of trees, the power of oaks, and mythical characters connected with the forest.

Kerry Turner composed The Berceuse for the Mary Rose in February 2004. The piece was commissioned by Members of the Cinq Beaufort Woodwind Quintet of Rotterdam. The composer was inspired after viewing the inner hull of a warship, which remains submerged in sea water, in Portsmouth, England. The quartet is historical fantasy piece,  which gradually unfolds the story of the famous ship. Turner portrays impressions of the sights, sounds and smells of the vessel and ultimately ends the work in silent reflection of the shipwreck. The Mary Rose, built between 1509 and 1511, is the only warship from her century on display anywhere in the world. One of the first ships able to fire a broadside, she was a favourite of King Henry VIII. Sadly, she sank during an engagement with the French fleet in 1545, however, her rediscovery and raising were seminal events in the history of nautical archaeology.

Antonín Dvořák composed the Quartet in F Major, Op. 96 in 1893. It was written during the summer he spent in the small Czech community of Spillville, Iowa, where he had brought his wife and children to experience the American Midwest. Dvořák had left his home in Vysoká, Czechoslovakia in 1892 and accepted the directorship of the National Conservatory of Music in New York and the small town offered him a much needed respite after a stressful year in New York City. The American Quartet was premiered January 1, 1894, in Boston, Massachusetts, by the Kneisel Quartet. Its nickname comes from the fact that it was one of the works composed while he was living in the United States. The same period also inspired him to create his renowned Ninth Symphony, From the New World. Though the pieces he wrote during this time were unmistakably inspired by the music he encountered in America, due to intense homesickness, they also include some of his most intensely Czech.