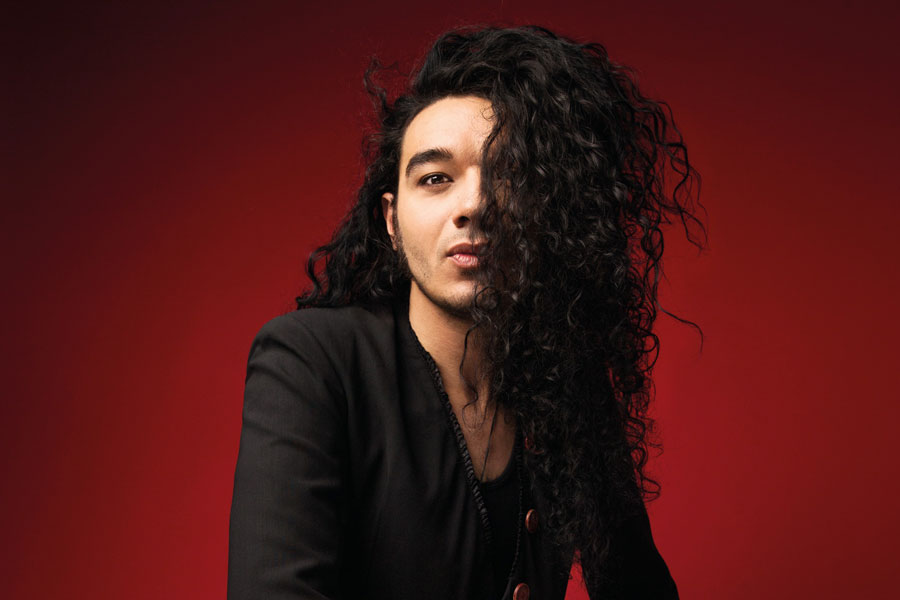 Born in Japan, Eiji Oue began his musical studies with piano lessons at the age of 4. At 15, Oue entered the Toho Gakuen School of Music as a performance major, beginning his conducting studies that same year with Hideo Saito, the teacher of Seiji Ozawa. In 1978 he was invited by Ozawa to spend the summer studying at the Tanglewood Music Center where he met Leonard Bernstein, who became his mentor and colleague. Eiji Oue is Conductor Laureate of the Osaka Philharmonic Orchestra, having served as Music Director from 2003-2011, and Conductor Laureate of the NDR Radio Philharmonic Orchestra Hannover, following eleven years as their Principal Conductor (1998-2009). He has also held the positions of Music Director of both the Minnesota Orchestra (1995-2002) and the Orquesta Simfònica de Barcelona i Nacional de Catalunya (Barcelona Symphony Orchestra) (2006-2010).

Nemanja Radulovic began playing the violin at the age of seven in his hometown of Niš, in southern Serbia. He later studied under Sir Yehudi Menuhin at the Faculty of Arts and Music in Belgrade, attended the Saarlandes Hochschule für Musik und Theater in Saarbrücken, the Stauffer Academy in Cremona under Salvatore Accardo, and the Conservatoire de Paris with Patrice Fontanarosa. He has been awarded prizes from the Joseph Joachim competition in Hannover, George Enesco in Bucarest, and Stradivarius in Cremona. Radulovic records for Deutsche Grammophon, his most recent album presents the repertoire of Pyotr Tchaikovsky, Violin Concerto and a Rococo Variations arrangement for viola and chamber orchestra. Radulovic was honoured with the International Revelation of the Year award by the Victoires de la musique classique in 2005, as well as an Honorary Doctorate from the University of Arts in Niš, Serbia, and an ELLE Style Award for Musician of the Year in 2015. Continuing a collaboration with the Bournemouth Symphony Orchestra and Kirill Karabits, he was selected as the orchestra’s artist-in-residence for their 2016/2017 season.

Leonard Bernstein said for years that he wanted to write “the Great American Opera.” Candide is the operetta he composed in 1956 in the vein of Offenbach and Gilbert and Sullivan. Based on Voltaire’s satirical novel of 1759, it accounts the misadventures of Candide, a naïve youth and his sweetheart, Cungégonde. For Bernstein, this story had contemporary relevance for an artificially joyful post-war America.

Candide played for 73 performances in its Broadway run, in 1956 and 1957 and Bernstein altered the piece for later revivals. The Overture was a hit and became one of the most popular concert openers. Brilliantly written and scored, it features two of the show’s tunes: the romantic love duet, Oh, Happy We, and the up-tempo music is from, Glitter and Be Gay. Through all of the scores transformations, the Overture remained essentially untouched, although Bernstein did expand the instrumentation to incorporate a full symphony orchestra.

Samuel Barber, whose aunt was Metropolitan opera contralto Louise Homer, entered the Curtis Institute in Philadelphia at the age of 14. As one of its first students, he studied piano, voice and composition there. In 1939, he had just returned to the United States after spending three years abroad. Barber had won the Prix de Rome in composition and had stayed in Europe. The Violin Concerto was commissioned by Philadelphia businessman, Samuel Fels, for one of his violin protégés, Iso Briselli, who had been Barber’s classmate. Briselli received the first two movements in the fall of 1939 and was pleased with them. However, in November, when the final movement arrived from the composer, it was not well received by Briselli’s violin coach, Albert Meiff. In the end, under considerable pressure from Meiff not to give the premiere at the insistence that it would hurt his career, Briselli declined to perform it. Yet, the work was enthusiastically taken up by violinist Albert Spaulding, who performed the premiere with Eugene Ormandy conducting the Philadelphia Orchestra at the Academy of Music, on February 7, 1941.

Aaron Copland first met conductor Serge Koussevitzky in 1923 in Paris, introduced to him by his teacher, Nadia Boulanger. Koussevitzky was preparing to move to the United States to assume his position with the Boston Symphony Orchestra and he requested that Copland compose a symphonic work. Copland finally began writing the piece in 1944. The theme of the work, in Copland’s words, would “reflect the euphoric spirit of the country at the time.” The Third Symphony, a jubilant full orchestral work celebrating the end of WWII, was completed in 1946 and premiered on October 18 the same year. Koussevitzky said, "There is no doubt about it… this is the greatest American symphony. It goes from the heart to the heart."

Copland’s Third Symphony is an emotional journey from the unease of the opening movement to the heroic optimism in the finale. Copland based the last movement on his Fanfare for the Common Man, which had been premiered in 1943 by Eugene Goossens and the Cincinnati Symphony Orchestra. The title of which Copland took from Henry Wallace, Vice-President of the United States during Franklin D. Roosevelt’s third term. Wallace had dubbed the twentieth century “the century of the common man.” Leonard Bernstein, later proclaimed of Copland’s Third, “The symphony has become an American monument, like the Washington Monument or the Lincoln Memorial.”