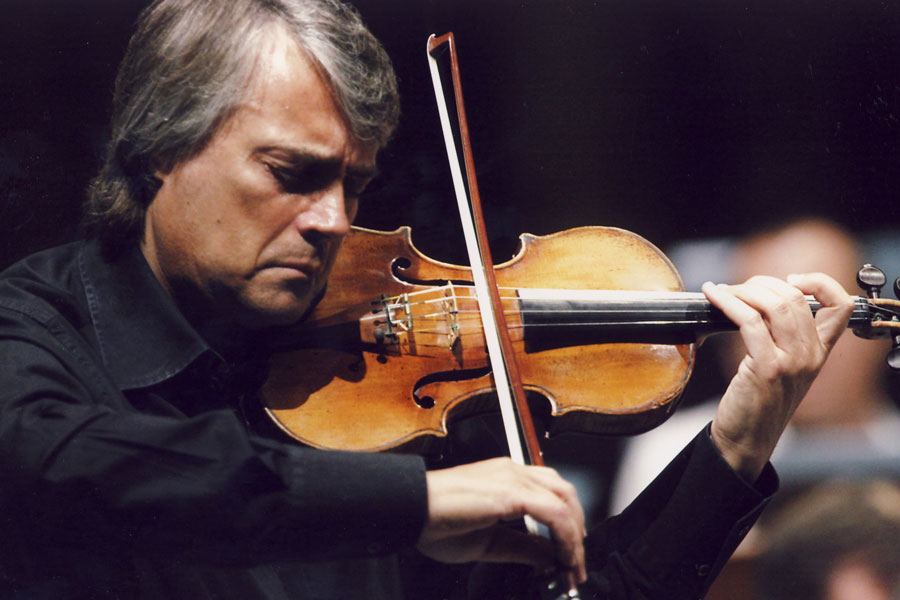 Maestro Gabriel Chmura is an outstanding Polish conductor, who in the course of his career he has worked with world-class soloists and ensembles. Shortly after graduation, he won the prestigious Conducting Competition, Herbert von Karajan. Four years ago, he received an honorary doctorate from the Wrocław Academy of Music for outstanding achievements in the field of musical art, as well as the promotion of the work of Polish composers.

Boris Davidovich Belkin is a Soviet-born violin virtuoso. Belkin began studying violin at the Central Music School of the Moscow Conservatory with Professors Yankelevitz and Andrievsky. In 1973 he won first prize in the Soviet National Competition for violinists. Since 1974 he has performed with many of the world’s leading orchestras. His first recording was Paganini No. 1 with the Israel Philharmonic under Zubin Mehta. Belkin’s other albums, available on Decca, include all the repertoires most adored concerti for violin and he has also released many concerti with prestigious orchestras on the Denon label. Mr Belkin also dedicates himself to the chamber music and since 1987, has given masterclasses at the Accademia Musicale Chigiana of Siena.  The artist performs on an instrument crafted by Roberto Regazzi of Bologna.

Mieczysław Weinberg was born in Warsaw to Jewish parents from the present-day Republic of Moldova. He fled the Nazis on foot, leaving his family in Poland, and spent most of his life in Moscow. Weinberg composed seven operas, 22 symphonies, 17 string quartets, and more than 100 other works in every genre of classical music. When the German invasion of the Soviet Union forced his evacuation to Tashkent in 1941 he met Dmitri Shostakovich. The men became close friends and frequent piano duo partners. In fact, Shostakovich and Weinberg even made an agreement that if either was arrested their children would be taken care of by the other. In January of 1948, Weinberg’s father-in-law, Yiddish actor Solomon Michoels, was murdered in Minsk on direct orders from Stalin. It was under these circumstances that the Rhapsody on Moldavian Themes was composed. It was natural for Weinberg to turn to Moldova for inspiration as his father had been a violin player and composer working for Jewish theatre troupes in Bessarabia. Thus the work employs a number of traditional folk songs as well as an unmistakable Jewish klezmer dance tune. Additionally, obeying political directives was vital in 1949, and not only had Moldova been annexed by the Soviet Union in 1940, but the Soviet Communist Party urged composers to use melodies from the country’s various ethnic traditions. Moldova was culturally and linguistically closely linked to Romanian traditions.

Max Christian Friedrich Bruch was a protégé of Ferdinand Hiller, who had close ties to Mendelssohn and Schumann. Bruch was initially recognized as an opera composer and was widely known for his choral music. However, after composing his Concerto in G minor, a work influenced by Mendelssohn's Violin Concerto in E minor, his choral reputation was quickly overshadowed. Bruch’s dramatic Second Violin Concerto was inspired by the playing of the Spanish violinist Pablo de Sarasate and he also became a significant influence on the composition of the Scottish Fantasy for Violin and Orchestra, which Bruch wrote in the winter of 1879 and dedicated to Sarasate. The Scottish Fantasy was premiered in September of 1880, with de Sarasate as the soloist. Bruch had long been fascinated by folk material and in the work, he uses authentic Scottish folk melodies as his themes. In fact, when the piece was originally published the full title given by the composer read Fantasy for violin with orchestra and harp, with the free use of Scottish folk melodies. The mention of the harp was overtly intentional as Bruch bestows a significant role to the instrument due to both its Romantic associations with the archaic ballads as well as with the folk music of the British Isles.

Jakob Ludwig Felix Mendelssohn Bartholdy was a German composer, pianist, organist and conductor. His music reflects a fundamental tension between Classicism and Romanticism in the generation of German composers after Beethoven. Mendelssohn's Third Symphony is the last symphony the composer completed. The inspiration for the work came in 1829, during his first visit to England and specifically Scotland. Mendelssohn wrote home on July 30th,

In the darkening twilight today, we went to the Palace where Queen Mary lived and loved. There is a little room to be seen there with a spiral staircase at its door. That is where they went up and found Rizzio in the room, dragged him out, and three chambers away there is a dark corner where they murdered him. The chapel beside it has lost its roof and is overgrown with grass and ivy, and at that broken altar Mary was crowned Queen of Scotland. Everything there is ruined, decayed, and open to the clear sky. I believe that I have found there today the beginning of my Scottish Symphony.

However, after the initial sketches, the composer set aside the piece until 1841. The work was completed in January of 1842 and premiered on March 3rd in Leipzig with Mendelssohn conducting. After a successful performance in England in 1842, Mendelssohn received permission to dedicate his piece to Queen Victoria. The score, published in 1843, read to “H. M. Queen Victoria of Great Britain and Ireland.” The subtitle, “Scottish” or “Scotch” appears in Mendelssohn’s correspondence about the symphony, but he did not include it on the score or the printed programs. It has been widely suggested that the sombre, melancholic opening is suggestive of the misty Scottish land, the clarinet theme of the Scherzo corresponds to the country’s folk music, and the dance-like main theme of the finale is thought to be a musical representation of the gathering of the clans.