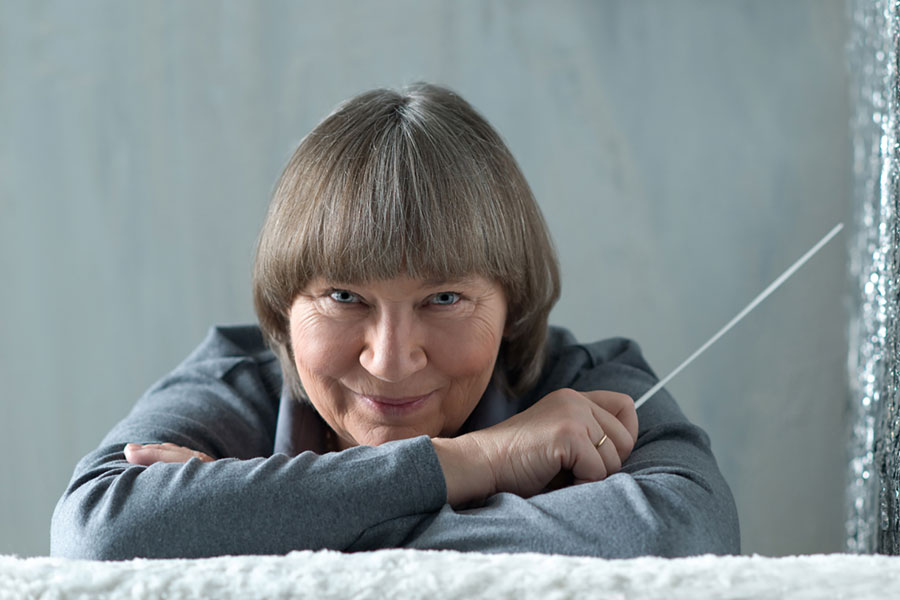 Agnieszka Duczmal studied conducting at the State College of Music in Poznań under Witold Krzemiński. She began working as a conducting assistant at the State Philharmonic in Poznań and as a conductor at the Poznań Opera. Duczmal won the First Polish Competition for Conductors in Katowice in 1970 and was the first woman conductor to perform in the famous La Scala Teatre in Milan. Ms Duczmal founded the Amadeus Chamber Orchestra of the Polish Radio and serves exclusively as its conductor and art director. The ensemble, which takes great pride in promoting young talent, has recorded over 8000 minutes of music for Polish Radio and Television, WDR, NDR, and the BBC, as well as French and Mexican Television.  In 1982, she received 'La donna del mondo' award presented by the International Culture Centre Saint Vincent in Rome under the auspices of UNESCO and the president of Italy for outstanding achievement in the domain of culture, science and social activities.

Krzysztof Jakowicz is a violinist and pedagogue born on September 30, 1939, in Palmiry. After graduating from the High School of Music in Wrocław, he studied violin under Tadeusz Wroński at the Fryderyk Chopin University of Music. He then continued his studies at Indiana University in Bloomington in the United States, with Josef Gingold and Janos Starker. His first successes came in 1959 when he won first prize in the Eugène Ysaÿe International Competition and the third prize at the International Youth Festival in Vienna. In 1962 he was awarded third prize and a special prize at the 4th International Henryk Wieniawski Violin Competition in Poznań. In 1970 Jakowicz received a special prize at George Enescu Festival in Bucharest. Since 1966, Jakowicz has taught at the Fryderyk Chopin University of Music. He is also a visiting scholar at SOAI University in Osaka in Japan and a lecturer in France, Austria, and Japan. He is a laureate of the Ministry of Culture and National Heritage Prize of the First and the Second Degree for the promotion of Polish Culture abroad and has received praise from the Polish Composers' Union for the numerous performances of Polish contemporary music. He was also awarded the Golden Cross of Merit. He performs on a violin made by the Italian luthier Paolo Albani in 1698.

Gioachino Rossini composed the opera, Semiramide, to a libretto by Gaetano Rossi based on Voltaire's Semiramis. The opera premiered in Venice on February 3, 1823. Semiramide was Rossini’s last triumph in Italy before he moved to Paris in 1824. Though the overture is performed regularly, the opera disappeared from the stage for several decades until two isolated revivals, the first at La Scala in 1962 and then at the Metropolitan Opera in 1990. The story is a drama, in which the Queen of Babylon murders her husband for the love of a young general. The general is subsequently identified as her own son and she ultimately saves his life by sacrificing her own.

Philip Gossett’s wrote in The New Grove Dictionary of Music and Musicians, that “No composer in the first half of the nineteenth century enjoyed the measure of prestige, wealth, popular acclaim, or artistic influence that belonged to Rossini.” He was a contemporary of Beethoven and Schubert, as well as the young Mendelssohn and Berlioz, and lived into the era of Wagner and Brahms. Born less than three months after the death of Mozart, Rossini wrote, “He was the wonder of my youth, the despair of my maturity, and he is the consolation of my old age.”

As early as 1838, Felix Mendelssohn had intended to write a concerto for French violin virtuoso Ferdinand David, concertmaster of the Leipzig Gewandhaus Orchestra of which Mendelssohn was named conductor and director in 1835. David and Mendelssohn had been friends since 1825. When Mendelssohn founded the Leipzig Conservatory in 1843, one of the first faculty appointments he made was David. The Violin Concerto in E minor is not only dedicated to David but was premiered by the artist in Leipzig in 1845. During the writing process, Mendelssohn corresponded extensively with the violinist working through aspects of technique and questions of balance. Thus, Mendelssohn’s Concerto became the first in a distinguished series of violin concertos written by pianist-composers with the assistance of renowned violinists. This role was famously taken up a generation later by Joseph Joachim and Brahms. Mendelssohn expert, Larry Todd, observed that the composer "came to regard the concerto more and more as a serious art form… in an age when variation and concerto form all too often were represented by fatuous examples of mass-produced virtuosity." In the modern violin repertoire, the piece is considered a major work among the brilliant concertos of Brahms, Beethoven and Tchaikovsky.

The original Carmen score by Georges Bizet is regarded among the most perfect compositions of its kind in the operatic repertoire. The one-act ballet Carmen Suite was the first ballet written by Rodion Konstaninovich Shchedrin specifically for his wife, then prima ballerina of the Bolshoy. The Suite was premiered by the Bolshoy Ballet at the Bolshoy Theatre in Moscow in 1967, with Marya Plisetskaya in the lead. The transcription created by Shchedrin maintains the musical image of Carmen, composed by Bizet, divided into thirteen movements. Shchedrin scored the work for a combination of a large body of strings and the widest possible range of percussion instruments. Shchedrin, from the generation of Soviet composers born in the 1930s, remained an extroverted musician whose reputation as a solo pianist  reinforced his career as a composer. Apart from his six piano concerti, he produced numerous solo works.