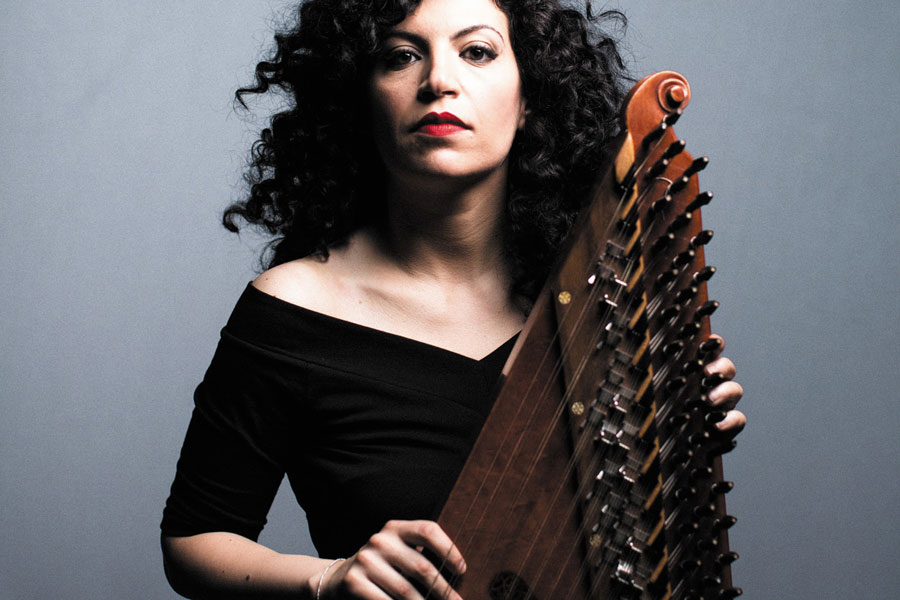 Virtuoso Syrian qanun player. Her unique and innovative approach to playing the qanun, originally a traditional instrument, have expanded her audiences to international platforms. She combines her extraordinary musical gifts with a generosity of outlook, warmth, humour and optimism.

The Qanun is a traditional Syrian 78 stringed plucked zither. It also exists in the rest of the Arab world, Turkey, Armenia and Azerbaijan but in slightly different forms. The Arabic word 'qanun' translates as 'The Law'. The reason behind that is that the qanun sets the pitch at traditional ensembles as well as leading it in some cases.

Maya has performed all over the world and is the winner of the Exceptional Talent award which enabled her to migrate to the UK early 2012. Currently she is working on her first debut album and researching “Music Healing for Syrian Refugee Children” as her PhD project at SOAS University of London, where she is also teaching the qanun and directing the SOAS Middle Eastern Ensemble.  Maya is a regular on the BBC and was featured at the BBC Proms at The Royal Albert Hall amongst other prestigious venues and festivals.
Maya is from a progressive and intellectual Damascus family of writers and artists. She was the first musician in the family and her father had a huge collection of music from all over the world which she used to listen to: Arabic Classical, Jazz, Fusion, World, Tibetan monks, Western Classical… She started learning music aged 7 at Sulhi al-Wadi institute of music in Damascus. When she was 12 she won the Best Musician Award in the National Music Competition for Youth. She continued at the High Institute of Music and Dramatic Arts in Damascus for a BA in Music specialising in qanun. At the same time, she did a BA in English Literature from the University of Damascus. She graduated from both in 2007 before moving to Dubai to perform and then to Oman in 2009 to teach and perform.

“The act of playing music is the opposite of death, it’s a life and hope affirming act. To me, music is my own healer and an antidote to what’s happening, not only in Syria, but in the whole world. I like to think that my music brings people back to humanity and to their heart centres, where no harm can be done to any form of life and where all can exist together in peace”