In the Shade of the Holy Mount Athos | Greek Byzantine Choir

Hymns to the Blessed Virgin Mary, traditional music from the Holy Mount Athos and works by the Byzantine master Ioannis Koukouzelis 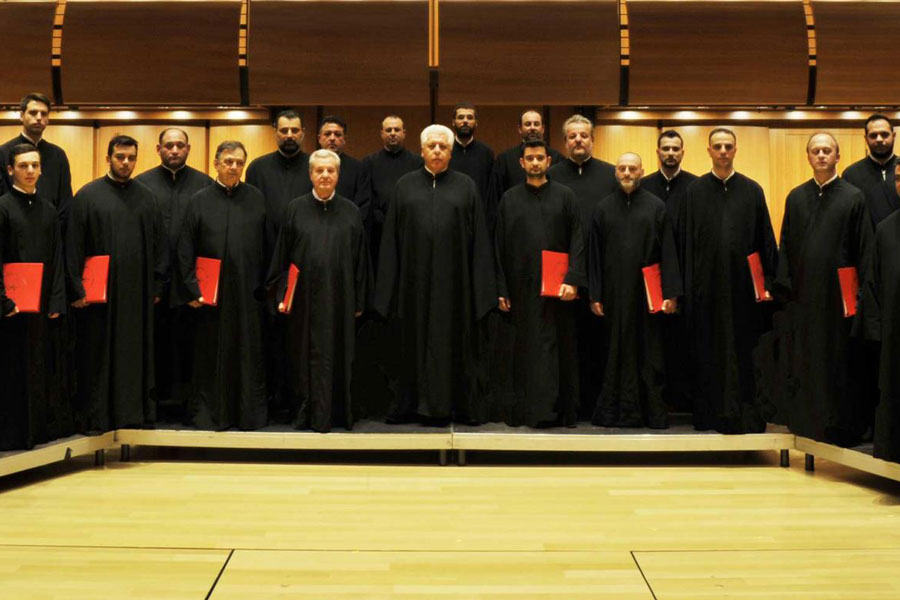 Byzantine liturgical music will sound again at Wratislavia Cantans – the famous Greek Byzantine Choir returns after a dozen or so years to the festival. Operating for over four decades, the choir was founded by Lykourgos Angelopoulos, Protopsaltis (first cantor) of the Patriarchates of Constantinople and Jerusalem, and the cathedral of St Irena in Athens, the most respected cantor of the Orthodox world. Under his leadership, the choir has introduced audiences around the world to the fascinating vocal tradition of the Greek Church, almost two thousand years old, so different from the music that we associate with Orthodox church, as we usually associate it with Russian Orthodoxy.

Performed by the Greek Byzantine Choir under the direction of Georgios Konstantinou (who continues the work of the late choir's father), Greek Orthodox hymns will be presented, devoted to the worship of the Most Blessed Virgin Mary, and liturgical music to the glory God, the Holy Trinity. Marian holidays belong to the so-called twelve great holidays of the Orthodox Church. The author of the text of the oldest known Marian hymn (we will hear him this evening) was a poet and a monk living in the sixth century. He arranged his work so that each part of the text would start with the next letter of the Greek alphabet. The word Akathist means literally 'not to sit', because through respect, this hymn is always sung standing up. Doxasticon, dividing the prayer Glory be to the Father, is sung on particularly important days – its text praises the Holy Trinity, or the saint remembered on a given day in the liturgy. Trisagion is also known to the Catholics as the hymn Holy God, Holy Mighty, Holy Immortal. One version of the story of the hymn's creation tells us that it was to be the song of angels heard by a boy raised by a storm to heaven at the time when Constantinople was haunted by earthquakes. Residents began to pray with these words, adding the plea ‘have mercy on us’ and the cataclysms ceased. Kratimais a composition with a text composed of meaningless syllables, imitating the angels who are incomprehensible to people – a pure expression of the glory of God.

Some of the hymns in the programme come from the Holy Mount Athos, so-called Republic of Monks, a sovereign enclave on the Khalkidhiki Peninsula in Greece, made up of smaller and larger monasteries and a hermitage. It is a mainstay of monasticism and asceticism, in which monks from all Orthodox countries have lived for over a thousand years according to unchanged strict rules (now their number is almost two-thousand, and they are happy about the unlessening vocations). The picturesque mountain is also known for its strict rules, such as the ban on women and females, the lack of electricity and mobile telephony, and the prohibition of vehicular traffic. Pilgrims who have had the opportunity to visit the monasteries, say that on the Holy Mount Athos ‘every stone seems to breathe in prayer’ – this place makes us think about the existence of the supernatural. In deep prayer, the monks give the impression of people suspended between heaven and earth. And just as the countless generations of their predecessors, they live caring for what goes beyond the everyday problems of the rest of the world.

Historic monasteries hide extremely valuable icons and numerous relics, they are also a treasury of magnificent Byzantine liturgical music. Services, consisting mainly of singing, are celebrated on the Holy Mount Athos virtually around the clock. Therefore, it is a legendary place for lovers of chant and old liturgical and musical traditions, also visited by Polish researchers.