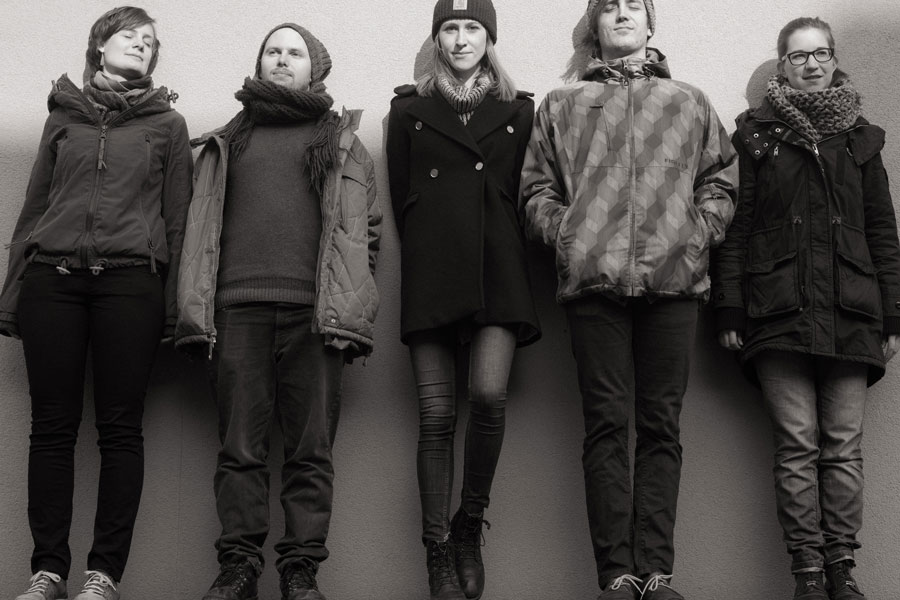 The Austrian chuffDRONE group presents a diverse jazz repertoire, open to musical experiments. This formation without a leader, with unconventional compositions and ardent improvisations, has developed an original style. Five unruly artists will play in Wrocław a new material which will be released on the band's second album in the coming months.

The group was formed seven years ago in Linz, founded by young artists seeking their own sound. Already in 2013, chuffDRONE toured extensively in Austrian clubs and festivals, and also achieved the first important success, winning the BAWAG P.S.K. Next Generation Jazz Award. In addition to the money prize, the quintet was given the opportunity to present itself in front of a large and well-established audience gathered in the most famous Austrian jazz club - Porgy & Bess. The band took advantage of this opportunity so effectively that since then it has been regularly invited to the Vienna club. A few months after winning the prize, the group recorded the material for their debut album entitled simply chuffDRONE; it was released in 2015 on the Jazzwerkstatt label. The album received very positive reviews, thanks to which the quintet started to appear outside of Austria. Since the founding of the band among its members have been saxophonist and clarinetist Lisa Hofmaninger, double bassist Judith Ferstl and drummer Judith Schwarz. Over a year ago, when the line-up of the band changed, the group was joined by pianist Jul Dillier and alto saxophonist Robert Schröck. The music of the band is constantly evolving, and the new instrumentalists have changed its character - also thanks to Dillier using unconventional performance techniques in his work and playing the prepared piano. In the summer, chuffDRONE plans to record the material for the next album. The quintet will play in Wrocław for the first time, elseshere in Poland it has performed twice so far. However, it will be their first visit with a premiere repertoire.

Shake Stew is a septet, which in less than three years has conquered the Austrian jazz scene, and is now gaining more and more fans on the international market, giving concerts including in Morocco, Canada, Mexico and the USA. The use of groove and  afro-beat and funk makes Shake Stew performances radiate with unique energy both on the stage and in the audience.

The band's leader is the bassist, composer and arranger Lukas Kranzelbinder. The thirty-year-old artist is currently one of the most active musicians in Austria. In 2016, he was asked by Jazzfestival Saalfelden to prepare a premiere project that was to open this prestigious music event. The performance was also associated with the four-day residence of the group at the festival. Kranzelbinder invited six outstanding instrumentalists representing the young jazz generation from Austria and Germany to collaborate. The concert was a spectacular success, and the material prepared by the bass player was released on the debut album The Golden Fang. The album was received with enthusiastic reviews, and the characteristic compositions, which consist of seemingly independent melodic lines,  sound phenomenally during concerts. The intensity of Shake Stew's music is not only a matter of great  compositions, but also the elemental improvisations of his colleagues, including the double rhythm section (two percussionists and two bassists). Last year, the group released their second album, Rise and Rise Again, on which the guest saxophonist Shabaka Hutchings appeared in two songs, known to the Wrocław audience. Kranzelbinder along with his Shake Stew is looking for new sounds, constantly expanding the jazz language and being inspired byy different musical genres. The group's work is a modern sounding music, full of genuine expression and vitality of the young generation of European artists.