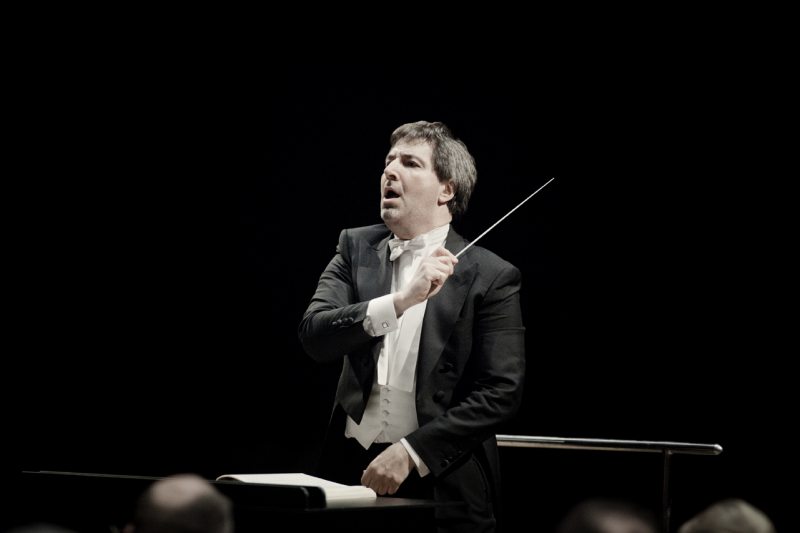 Daniel Raiskin was raised in St. Petersburg by a prominent musicologist. He attended music school from the age of six and went on to study at the celebrated conservatoire in his native city where he focused on the viola and conducting. Inspired to take up the baton after an encounter with the distinguished teacher Lev Savich, he chose to make a gradual transition into a conducting career. At the age of twenty, Daniel Raiskin left the Soviet Union to continue his studies in Amsterdam and Freiburg. He chose to make a gradual transition into a conducting career and soon became recognised as one of the most versatile conductors of the younger generation. Raiskin, who cultivates a broad repertoire, often looks beyond the mainstream in his strikingly conceived programmes. Since 2005, Daniel Raiskin has been the Chief Conductor of the Staatsorchester Rheinische Philharmonie in Koblenz, and since 2008 he has held the same title with the Artur Rubinstein Philharmonic Orchestra in the Polish city of Lódz.

Andrei Ioniţă, born in 1994, in Bucharest, is a Romanian cellist. He is a student of Ani-Marie Paladi at the Iosif Sava Music School in Bucharest and Professor Jens Peter Maintz at the Universität der Künste in Berlin. In 2003, Ioniţă won the David Popper International Cello Competition, and won first prize in the Aram Khatchaturian International Competition, in 2013. In 2014, he received second place at the 63rd ARD International Competition and the Emanuel Feuermann Competition. Most notably, Ioniţă won first prize in the cello division of the 2015 International Tchaikovsky Competition in Moscow. Ioniţă has been chosen as a BBC New Generation Artist for 2016 thru 2018. He is one of six musicians who will be offered opportunities to work with the BBC orchestras and perform in BBC Radio 3's Monday Lunchtime Concert series. Ioniţă plays a 1671 cello by Giovanni Battista Rogeri on loan to him from Deutsche Stiftung Musikleben, German Foundation for Musical Life.

Fryderyk Chopin composed his Polonaises, Op. 40, in A major and C minor as a pair in 1838 and published them in 1840. As a Polish expatriate living in Paris following the November Uprising, the composer embraced his heritage and the Polonaise is closely linked to the national strand in his compositions. The Polonaise in A major Opus 40, No. 1 is written in the martial spirit and prowess of the Polish knights, whom with the call of the trumpets, bore the Polish standard to victory.

This explicitly Polish musical form which has been so closely identified with Poland's history through more than three centuries, originated in 1573 in Kraków on the occasion of the coronation of the young French prince, Henri d'Anjou, as king. In Poland, the polonaise, also known as the "chodzony", "chmielowy" and "świeczkowy" was danced by the Polish gentry, townsfolk and populace since the Baroque era and became a fashionable society dance at many European courts.The basic features of an authentic polonaise rhythm is a measure of six-eighths, though sometimes written in 3/4 time, of which the second eighth is divided into two-sixteenths. Polonaise has a moderate tempo, a distinguished character and is always a promenade march, not a dance. It is additionally, Slavonic in its general tone and aristocratic in its manner and mood.

Arthur Rubenstein said that the first Polonaise in A major, known as the Military Polonaise, was the symbol of Polish glory, while its companion piece in C minor was that of Polish tragedy. During the Nazi invasion of Germany in September 1839, the former piece was played daily over the radio to bolster the morale of the Polish people.

Antonín Dvořák began his Cello Concerto in B minor in New York on November 8, 1894, completed it February 9, 1895, and continued revising the end until June. The composer conducted the first performance, with Leo Stern as the soloist, on March 19, 1896, in London. In 1892, Dvorák accepted a directorship at the National Conservatory of Music in New York. Nonetheless, due to intense homesickness, the music he composed during this period includes some of his most intensely Czech. The New World Symphony is the best known of his American compositions, however by the time he finished the Cello Concerto in B minor, his homesickness had won him over. There are no traces of Americana in the work, the concerto is full of the spirit of Bohemia.

The Irish-American cellist and composer Victor Herbert was also on the faculty of the National Conservatory and it was Herbert’s performance of his own Second Cello Concerto that inspired Dvořák to complete the one he had begun. He had set aside his cello piece the previous year due to concerns about how to balance the cello with a large Romantic orchestra. Upon facing this dilemma, Dvořák decided to use the cello’s upper register as well as adding trombones, tuba, piccolo, and triangle to the conventional concerto orchestration. The second stimulus for the composition came from Hanuš Wihan, a compatriot playing cello in the Bohemian String Quartet, who nagged Dvořák to write a virtuosic solo piece for him. Dvořák presented the finished concerto to Wihan when he returned to Prague in 1895, and the cellist embarked on making changes and additions to the score. However, Dvořák, feeling that Wihan had overstepped his boundaries, presented his unscathed version to his publisher with the following note, “I must insist that my work be printed as I have composed it. You may have it only if you promise not to allow anyone to make changes without my consent… And there is to be no cadenza in the last movement [Wihan had written one]. The finale closes gradually, diminuendo, like a sigh, with reminiscences of the first and second movements – the solo dies away to pianissimo, then swells again, the final bars taken up by the orchestra and the whole concludes in a stormy mood. That is what I wrote and what I want.”

Pyotr Ilyich Tchaikovsky composed his Fourth Symphony in 1877, during the period immediately following the dissolution of his short marriage to Antonina Milyukova. He completed the work in January 1878 and the first performance was given in Moscow on March 4. The first draft of the Symphony, likewise, coincides with the initial stages of his relationship with his patron, Nadeshda von Meck, with whom he corresponded frequently and who influenced his work for the rest of his life. The piece is dedicated to her, though not by name.

“The introduction is the seed of the whole symphony,” he wrote to his patron, “This is fate, that fatal force which prevents the impulse to happiness from attaining its goal, which jealously ensures that peace and happiness shall not be complete and unclouded… Its force is invisible, and can never be overcome…Thus all life is an unbroken alternation of harsh reality with fleeting dreams and visions of happiness … There is no escape… We can only drift upon this sea until it engulfs and submerges us in its depths.”

The second movement he described as, “a whole procession of memories… another phase of depression, that melancholy feeling that comes in the evenings when weary from your labour, you sit alone and take a book, but it falls from your hand.” However, in the Scherzo, he wrote, there are no “definite feelings” but rather “capricious arabesques, the elusive images that can rush past in the imagination when you have drunk a little wine and experience the first stage of intoxication”

In the Finale, Tchaikovsky composed the essence, of a folk celebration, “a picture of festive merriment of the people,” with the message to take joy in others’ joy. He told von Meck in their letters that the Russian element emerged “of its own accord,” stimulated by homesickness. “If within yourself you find no reasons for joy,” he wrote, “then look at others. Go among the people. See how they can enjoy themselves, surrendering themselves wholeheartedly to joyful feelings.” In the music, he illustrates the individual lost in the crowd when the fate motive intervenes. “Hardly have you managed to forget yourself and to be carried away by the spectacle of the joys of others than irrepressible fate again appears and reminds you of yourself.”

Tchaikovsky later wrote to the composer Sergei Taneyev, a former student, “I was not trying to express any new thought. In essence my symphony imitates Beethoven’s Fifth; that is, I was not imitating its musical thoughts, but the fundamental idea. Do you think there is a program in the Fifth Symphony? Not only is there a program, but in this instance, there cannot be any question about its efforts to express itself. My symphony rests upon a foundation that is nearly the same, and if you haven’t understood me, it follows only that I am not a Beethoven, a fact which I have never doubted.”