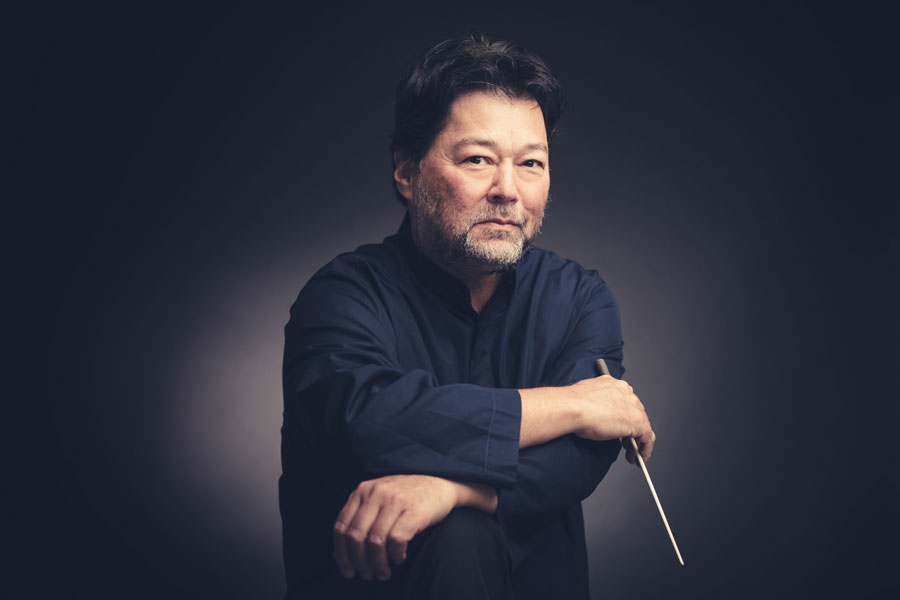 Joseph Swensen was born in Hoboken, New Jersey and grew up in Harlem, New York City. He currently holds the post of Conductor Emeritus of the Scottish Chamber Orchestra, where he was Principal Conductor from 1996-2005. He is Principal Guest Conductor of the Orquesta Ciudad de Granada, in Spain, and Artistic Partner of the Northwest Sinfonietta, in the United States. He has served as Principal Guest Conductor and Artistic Adviser of the Orchestre de Chambre de Paris from 2009-2012 and has held positions at the Malmö Opera (2008-2011), Lahti Symphony, and the BBC National Orchestra of Wales. Swensen is the Starling Professor of Music, violin, at Indiana University, Jacobs School of Music. He has also been awarded an honorary doctorate from St. Andrew’s University, Scotland, and was invited to give a TEDx Talk with the title “Habitats for Music and the Sound of Math,” about music education and the developing brain, at the New York Institute of Technology. Joseph and Victoria Swensen are the founders of Habitat4Music, a non-profit organisation devoted to establishing participatory music education programs for children in underserved areas world-wide.

Anton Bruckner composed his String Quintet in F major in 1878 after receiving a commission from Josef Hellmesberger Sr., director of the Vienna Conservatory and concertmaster of the Vienna Philharmonic. The piece was not premiered until 1885, however, it quickly became one of Bruckner’s most frequently performed compositions. As a chamber composition it is unique amongst Bruckner’s output, otherwise devoted to symphonies and liturgical works. Thus the Quintet, composed for a pair each of violins and violas, plus cello, shares much in common with Bruckner’s symphonic catalogue. The work features passages of vigorous counterpoint, chromatic harmonies, and a Wagnerian approach to motifs, in addition to references from Austrian folk music.

The Quintet’s third-movement Adagio, conceptualized in its original form as a scaled-down version of a full symphony orchestra, lends particularly well to adaption for full instrumentation. Music critic, Wilhelm Altmann, wrote in his Chamber Music Handbook for String Players, “If the only thing Bruckner had ever written for string instruments had been the slow movement to his string quintet, his reputation would have been secured for all time… The Adagio takes one directly to heaven. This is music of affirmation and there is no sense of resignation to an inevitable and unwished for fate.”

Gustav Mahler composed his Fifth Symphony in 1901 and 1902, and he conducted its first performance in Cologne on October 18, 1904. Having come from humble beginnings, Mahler had reached the pinnacle of his profession by 1901.  He was serving as principal conductor of the Vienna Philharmonic and director of the Vienna Court Opera, in Europe’s musical capital. That summer he began work on his overwhelming Fifth Symphony. Of all Mahler’s symphonies, this is the one most rooted in Viennese tradition. He stylistically swings every rhythm in the Viennese style, which is decidedly different from the German tradition. It is his first purely orchestral work since the First Symphony written in 1888 and his first orchestral work to dispense with both the human voice and programmatic elements.

Work progressed smoothly on the composition of the Fifth, but a breakthrough occurred when the composer met Alma Schindler and fell completely in love. The couple met on November 7, 1901, and after only three weeks the composer proposed marriage. They were married in less than four months. Thus, the central reason for the lasting popularity of Mahler’s Fifth Symphony is that it famously includes a love-poem and declaration of adoration for Alma. The fourth movement, Adagietto, is scored only for strings and harp. Its gentle melody and romantic appeal of the movement is beloved by audiences both within and apart from the greater work.

Richard Strauss composed Metamorphoses during the closing months of the Second World War, from August 1944 to March 1945. The work was commissioned by and dedicated to Paul Sacher, the founder and director of the Basler Kammerorchester and Collegium Musicum Zürich. It was Sacher who conducted the first performance on January 25, 1946, in Zurich. Strauss was unfortunate to live at a time when his creative abilities were pitted against his understanding of larger world issues. Joseph Goebbels, Hitler’s minister of propaganda, had appointed him president of the new state music bureau, without the composer's agreement. From that point, Strauss became stranded in a country where music and politics became inseparable. Yet it was during World War II, that ultimately Strauss came to terms with the devastation of Nazi power through music.

Strauss wrote, “The burning of the Munich Court Theater, where Tristan and Die Meistersinger received their first performances, where I first heard Freischütz seventy-three years ago, where my father sat at the first horn desk for forty-nine years… it was the greatest catastrophe of my life; there is no possible consolation, and, at my age, no hope.” Shortly after the bombing of Dresden, the last German city to fall, Strauss began sketching a Trauer um München (Mourning for Munich), a requiem for German civilisation, written solely for strings.

Strauss favoured quotation and integration and he recognised the likeness of one of his main musical ideas to the infamous funeral march from Beethoven’s Eroica Symphony. He also recalls, in another passage, a theme from act 2 of Tristan and Isolde. His Metamorphosen melody embodies four repeated notes and then a descending minor scale. Along with three other main themes, the piece is developed polyphonically. Strauss made the most of the utter coincidence and allows the cellos and basses to quote Beethoven’s theme in the finale. Here, at the pieces’ end, he wrote in the manuscript, “In Memoriam!” The memorial, it is widely accepted, was not just for the bombed opera houses, but for the shattered culture that they represented. A few days after the completion of Metamorphosen, Strauss wrote in his private diary, "The most terrible period of human history is at an end, the twelve-year reign of bestiality, ignorance and anti-culture under the greatest criminals, during which Germany's 2000 years of cultural evolution met its doom."