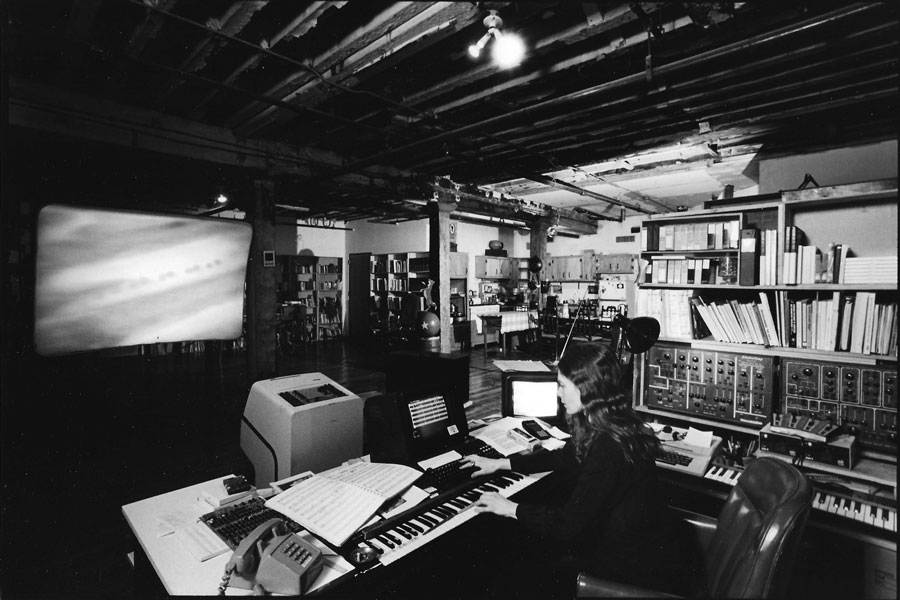 Laurie Spiegel is one of those rare composers in whom head and heart, left brain and right brain, logic and intuition, merge and even exchange roles.Though she is one of the highest-tech computer composers in America, Spiegel is also a lutenist and banjo player, and sees the computer as a new kind of folk instrument. She makes her most intuitive-sounding and melodic music from mathematical algorithms, and her most complex computerized textures by ear and in search of a desired mood. Form and emotion are as difficult to separate in her music as they are in that of her idol, J.S. Bach.

Spiegel was born in Chicago where in her teens she played guitar, banjo, and mandolin, and through them cultivated a devout philosophy of amateur music making. After receiving a degree in the social sciences, she returned to music. Having taught herself notation, she studied classic guitar and composition privately in London, then baroque and renaissance lute at Julliard, and composition with Jacob Druckman and Vincent Persichetti.

Having worked with analog synthesizers since 1969, she sought out the greater compositional control which digital computers could provide and wrote interactive compositional software at Bell Labs from 1973-79. She later founded New York University's Computer Music Studio, and became famous in rock music circles for her music software for personal computers, especially MusicMouse. MusicMouse's built-in musical logic allows even nonliterate musicians to create music in either tonal or atonal styles by hitting the computer's keys and moving its mouse. Distilled from centuries of musical practice, MusicMouse's statistical possibilities are enormous, and make any amateur feel suddenly in control of myriad elements. Still, the key to using MusicMouse to make successful music lies in what one does beyond the software, in both musical performance and electronic orchestration.

Despite her innovative involvement with technology, Spiegel the composer has never been dominated by Spiegel the computer technician. Her music from the 70s used compositional algorithms (in one case a realization of Kepler's "Harmony of the Planets", included in the Voyager spacecraft's record Sounds of Earth) to generate music in an accessible, minimalist vein. Some of that music was captured on her record on the Philo label, The Expanding Universe, containing works from 1974-6.

But in the early 80s, Spiegel distanced herself from the downtown New York scene that she had helped create, complaining that the new music scene's general direction was toward an "expansion of the collection of tools and techniques available to make music (useful, but not as the central content of a work)". "For me," she more recently explained, "music is a way to deal with the extreme intensity of moment to moment conscious existence." Since breaking away, Spiegel has lived as one of New York's most independent musicians, supporting herself by her software and circulating her music privately.

Those who fell in love with the folk like melodies and early algorithms of The Expanding Universe may be surprised to hear how much darker and more complex Spiegel's recent music has become. "Minimalism" may still aptly describe the slow movement of pitch in these pieces (Unseen Worlds), but it gives no hint of their complex timbres, glacial momentum,and cathartic climaxes. Such vibrant, expressive music could only have come from a composer who put her intuition and imagination first, yet who had the immense technical know-how needed to meet the challenges they posed.